“O” is for October

I am O-ficially dragging now in this challenge. Even coffee isn’t helping. But here’s why: I am editing two incredible novels, one of which has been requested by NINE (and my writing friends will understand how BIG this is) different agents. Most of us are delighted when just One agent wants to read more, but nine?? Her novel is a hot potato in my hands: I have to toss it back to her as fast as I can because we don’t want to keep the agents waiting.

For those of you just getting to know me, editing is what I do: I take a finished novel draft and I polish it up and make it squeaky clean so the writer is presenting his/her best STUFF when they mail their baby to an agent or publisher.

I do this for about nine months of the year. After July, however, I am officially off the clock with editing, which brings me to my letter “O.” 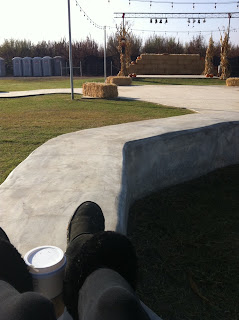 Enjoying the fall air at my haunt.

I am just like most people when it comes to fall – I love the smell and the feel of the morning air as it begins to chill. I love the idea of hayrides, pumpkins, warm sweaters, hot coffee steaming from my cup, boots, and the county fair. I love that I have to put on a sweatshirt at night. I love the way the sun’s path falls gently on the horizon so that its rays shine unobtrusively at an angle rather than drilling us from above like the unrelenting, fiery jackhammer sunshine of summer.

But I am grateful for October for another reason, too—Halloween. For some people, it’s just another holiday, but some of us prepare for and look forward to October beginning as early as the previous November. We are called haunters.

Haunters think of Halloween as football fans do Super Bowl Sunday; in fact, haunters treat the entire month of October as basketball players do March Madness.  For us, though, it’s October Awesomeness, and we train all year for it.

We have our own conventions. Our convention season is now (April-June) where we gather with other Halloween enthusiasts from all over the world to socialize, take classes, and tour other haunted houses.  I’m grateful for the friends I get to see again and for the ideas we get to share.

We take our October jobs seriously. We take time off from our “real jobs” in order to make Halloween and the business of scaring people a priority during October. Some of us are lucky enough to claim haunting as a yearly profession. Big or small, part time or full time, though, haunters are alike in one very special way: passion.

So think of us this October. When you’re enjoying festivities of the fall, remember to visit a haunted attraction, too. They are full of people like me. Believe it or not, we’re just like you—except that we like scaring you.