“P” is for Planes

I don’t travel a lot, but if you’ve been reading this blog longer than during the A-Z Blogging Challenge, you might beg to differ. By evidence of the frequency of travel posts, it appears that I fly more than I write. That isn’t so. Anyone close to me knows that I hate flying—more specifically, taking off and landing—so I do it as infrequently as possible. However, for whatever reason, when I do fly, stuff happens. Stuff that I can write about. So for that, I am grateful for PLANES.

Things seem to happen to me even before boarding planes. Once, I somehow made it through airport security in Charlotte with a set of rental car keys dangling from my pocket. Rental.Car.Keys. Hence, the rental car was still sitting where I’d dropped it at Avis… with no keys.

You could infer that security is lax, right? Imagine my surprise, then, when last November my sparkly jeans got me nearly cuffed and arrested in Bakersfield as I left for a haunt convention in Philadelphia.

Standing in the security line, I visited with a gal pal I hadn’t seen in years. She told me a horrific story about how airport security once singled her out and patted her down for no apparent reason.

“They even touched my breasts!” she said. Then, with sarcasm, she gestured to the front of her shirt, “Yes, these are actually hidden bombs!”

I glanced down at my own chest and felt fairly confident that no one would believe I was smuggling anything other than a padded bra onto this flight. My friend’s story was unique—an outlier—a marked deviation from what normal travelers experience.

Our conversation ended when my tub-collecting began. I don’t travel light. Besides playing the “scale game” with my checked luggage, adding and removing items to come as close to the 50-lb. limit as I can like it’s a challenge on The Price is Right, I also carry a purse, laptop, iPad, and always wear a belt, watch, shoes, and jacket that need to be removed. By the time I’m nearly naked and all questionable items are going down the conveyor belt, I have filled at least five tubs.

Great. BFL now has a full body scan. With no escape, I entered the scanner and lifted my arms, palms out, and smiled, already daydreaming about the frightful fun waiting for me in Philly. As I turned to walk out, the TSA agent asked me to look at the monitor to see my image. “Gosh, that’s nice,” I thought. “Small town airports show you your scan so you can tell there’s no funny business going on.”

This isn’t really me, but how’s my art? 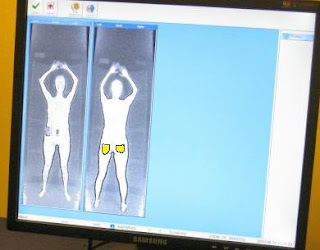 “See this right here?” The agent was pointing to an x-ray of a girl with her arms over her head, who also had a glowing butt. I recognized that butt and the glow, and my eyebrows shot up with humor.

“OH! Yes! Those are my cute jeans!” For proof, I twirled around, lifted my shirt and stuck out my rear-end in a “see-I-am-showing-you-my-sparkly-jeans” sort of way. He didn’t care, and neither did the female TSA agent who was hovering over me like a prison guard. I glanced aside, and she was already putting on surgical gloves.

As I wondered what “area” necessitated surgical gloves, she led me to the wide-open, corded off section where we’ve all seen people humiliated in broad daylight. I was amused because I knew she wouldn’t find anything in “that area.” She explained that she’d use just the backs of her hands (to feel my butt), presumably to make me feel better that another woman’s palms were not groping me.

It should be noted that I am a gamer. If I can take one for the team so that maybe TSA will catch a REAL terrorist wearing sparkly jeans one day, I’m in.

I stood there and held my shirt, patiently waiting for her to finish. When it was over, she said she needed to test my hands. I produced my palms and she rubbed them with soft, white, round cloths, which she then placed into a machine.

I thought the ordeal was over; my mind had already downed a vodka-cran and was sitting with its head between my knees for takeoff.

Then, the alarms started going off.

All the TSA agents turned and looked at me, while I looked at the machine as if to say, “What’s wrong with your machine?” The female’s eyes went from the flashing alarms to me, back to the alarms, and then to me. She had a defeated, exhausted look on her face when she asked me, “Did you use lotion on your hands this morning?”

I stared for a moment. Of course I’d used lotion… along with hair gel, mousse, and hairspray within the last 30 min. I’d gotten up at 3:30 am with no time to spare, so I’m sure I could have styled another head of hair with what was left on my hands. “Yesssss,” I replied, my first hint of indignation showing.

For the record, she knew I wasn’t a security risk; I could see it in her face. “I’m sorry. Because these alarms were tripped, I have to do a full pat-down on you.” And before she’d finished the sentence, two other female TSA agents were beside me to ensure I wasn’t going to try to hide the bombs I had in my cute jeans.

As they escorted me past the conveyor belt, I saw my purse, laptop, iPad, belt, watch, and shoes unattended in all the various tubs while other travelers gathered their belongings and left. I entered a room that looked like the TSA break room (really?) and my escorts shut the door. The first agent explained that I’d be touched in (very) private areas; she would be going up and down my inner thighs from both the front and the back; she’d be going inside the waist band on my previously cute jeans (they were fast losing their cuteness), and yes, she would be groping my breasts…. with the backs of her hands.

I remained calm. What else could I do? TSA considered me a terrorist already, so any behavior other than total cooperation and I’d be missing my flight.

After I’d passed the grope-test, they led me back to the now-empty security area, where I watched as they (literally) went through every bag, wallet, zipper, shoelace and gum wrapper in my stuff. One wise cracker even opened my laptop and made fun of my missing backspace key.

Really? You just groped my breasts, and now we’re going to laugh at my haggard keyboard?

One piece at a time, the TSA agents returned my things, beginning with my shoes, belt, and watch. At this rate, I would be missing my flight.

“Can someone please check to see if my plane is still there?” I asked as I was hopping on one foot and threading my belt through those stupid jeans.

Instantly, the older man bolted down the stairs, only to reappear 15 seconds later with a panicked look on his face.

“You need to hurry!” he said, looking at ME, the target of obvious racial profiling. 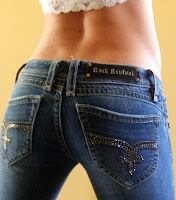 “Me?!” I said incredulously as I shoved one arm in my jacket and grabbed the iPad out of the tub. “Talk to them!” I gestured to the TSA agents with a stink eye. To top it off, I was now sweating.

“Well, they are holding the plane just for you, so hurry!”

At that, the assembly line of TSA agents simultaneously decided they’d looked enough, and in 20 seconds, I had my laptop and everything else and was running down the escalator. Once aboard the small prop plane, the flight attendant announced my seat number like he had it memorized (“Where’s that damn 6A??”).

“6A, welcome aboard. Please take your seat,” he said calmly, and all eyes were on me in a way that suggested they assumed why I was late.

“Look at her in those outrageous jeans. And all that hairspray!” they must have whispered. “Princess couldn’t be bothered to make it to the airport on time.”