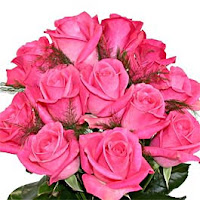 In the A-Z Blogging Challenge, I chose a theme because I couldn’t imagine selecting a word from Wordland each day without a method of filtering some of them from the big pool. My theme is gratitude, and I chose it so it would force me to remember to be grateful for even little things. But, during this 26-day vow to put the rest of my life on hold, I haven’t always focused on small blessings: God’s voice is sort of a big one that I chose for “G” and I am reeeeeeally grateful for my “E” word, Eternity.

But today, along with the silly “P” for Planes and “O” for October, I am also grateful for Roses.

Roses are the messengers of the flower family. They say “I love you” and “I’m sorry.” They say “My condolences” and “You’re a fabulous friend.” Flowers can say what people have a difficult time putting into words. Sometimes, when we can’t talk, we say what we need to with roses.

Roses are the Cadillac of the flower family. Grocery store bouquets are functional and sweet, and they say things like, “Gee, I think you’re cute” and “I know you had a tough day.” But roses command respect. Roses don’t say you’re cute; roses say you are the most beautiful woman I have ever seen in my life.

Because they are costly, the buyer of the rose has made an investment of time, consideration and money when choosing this flower. He is saying “You’re special” and “You are valuable.” He is saying, “I chose roses because carnations cannot speak the language I need to speak to you.”

I get that roses are a girl thing. I love them so much that sometimes I will buy them for myself just to have them on my desk to look at while I work. Roses are like Snow White’s magical mirror, telling the bearer she is the prettiest of them all. When we enjoy a bouquet of roses, we symbolically hold court with all the other women from all the other ages who’ve also received these messengers of love.
My love affair with roses began my senior year of high school, the day after graduation. I was sitting at home with my boyfriend when a florist arrived.

“Dana, they’re for you!” my mom announced as she produced a vase full of two dozen long stemmed pink roses.

I gasped. I can remember doing that because their very pink-ness took my breath away.

Roses are red, or so I’d been told, but these most perfect buds were positively pink, and I was ruined for life. I looked sideways at my boyfriend and smiled. What a perfect way to end our senior year of high school. He was so thoughtful.

“Those aren’t from me,” he said, his lips tight and his eyes boring down on the bouquet like it had just slashed the tires on his truck.

It turned out they were from a secret admirer. My boyfriend wanted me to toss them out, and that was his line in the sand. “No,” I said. “The roses have done nothing wrong. They are staying.” And they did. He didn’t, but they did.

The next rose mishap came just a year later when I was dating two young men with the same first name. One was in the Navy and one lived in town. On my 19th birthday, I received a dozen roses, certainly not from the Navy boy, right? I immediately called the local boy and thanked him for the roses, to which he replied, “You’re welcome.”

A few days later, my birthday card arrived from my Navy guy. He hoped I liked the roses.
You’ll be happy to know that I never dated the first boy again after that day because I knew a secret he did not. Roses are messengers. If you’re going to listen to the love songs and intimate whispers, you must listen for the warnings, too.

(Editor’s addendum: No, the secret admirer never revealed himself. However, after using yearbook signatures to compare handwriting, I figured out who sent the beautiful pink roses. To this day, I don’t think he knows that I know it was him.)