“S” is for Snuggly Seatmates, Seasickness, and Screwdrivers

Yes, I thought I’d blow right past “S” and move on to “T” today for Travel, but that was before boarding my flight from San Francisco to Dallas. See, San Francisco was just a layover. The rest of my trip takes place in Dallas, where I am attending HauntCon — a national convention and trade show for haunted house owners and Halloween enthusiasts. But first, my travel follies, Part 2. 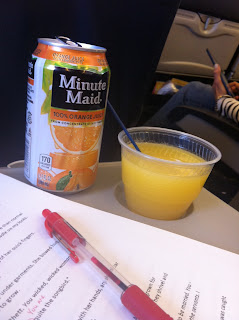 Clarissa, this is your novel.

It didn’t take long to know I’d be writing an addendum to my earlier post on Travel when I stepped aboard a plane so small I wondered if the airline knew we were going across the country and not just over to Alcatraz. Four tiny seats per row, two on each side of the aisle. And by tiny, what I really mean to say is Barbie size.

As the passengers made our sluggish march toward the back of the plane, peeling off one by one as we found our seats, my eyes scanned the row numbers looking for 11B. On paper, row eleven seemed close to the front. In reality, I was at the back of the plane. And by back, what I mean to say is I think the airline removed a line of toilets to add my row.

When I passed row 8, I was beginning to narrow my gaze on my seat mate in row 11. Three people occupied the row, but 3 1/2 seats were taken. My seat mate in 11A was spilling into 11B.

Yep, there was no avoiding it. We would be snuggling on this flight.

I am not a big gal, but when I sat in my seat, we touched. I could tell he was probably uncomfortable with his overflow into 11B, so I decided that we’d better get to know each other before the impending nuptials. I gave him a cheery “hi!” and asked him why he was going to Dallas. About 20 minutes later, I wanted to poke out my eyes with a hot stick as he regaled me with the most minute details of his life, like how he can stay awake during every dream he has. He even made a pretend air-drawing on the seat back in front of him to illustrate his recurring dream starring Freddy Kruger.

“See, and then Freddy jumps out of the car and says, ‘You’d better not laugh.’ But of course, I laughed.”

During takeoff, I had only one armrest to white-knuckle because there wasn’t room to lower the one between my seat mate and me, so I did my best to move close enough to crush that aisle armrest like a drained soda can. This gave me about 2/3 of my paid seat space. Soon, the dreamer fell asleep, and that’s when the real fun began.

For the next three hours, he slept and dreamed–and I know he was dreaming because he twitched spasmodically and sporadically, sometimes violently. And the deeper sleep became, the more he relaxed and his girth spilled onto mine. At about the midway point, our plane turned into somewhat of a glider and started bouncing around the sky like a rubber ball in a pizza parlor, forcing my seat mate closer and my stomach queasier. I’ve been on the ocean several times in a boat, but I’ve never been this seasick–or this accosted by a stranger’s midsection girth.