“U” is for Un-believable!

No, this blog entry will not be about gratitude.

As we make our way to the end of April and the culmination of the A-Z Blogging Challenge, I see that I somewhat failed in my attempt to write one blog post per day due to my traveling schedule. Not one to let trivial things like sleepless nights and day-long bus tours smite me, I am going to finish this challenge, beginning with where I left off… “U.”
It will not come as a surprise to my regular readers that I suffer from travel follies, but what may boggle the mind is that I haven’t learned from them. Blame it on my lack of sleep, tendency to procrastinate, or my hairstyle, but I did it again. I didn’t sleep much Sunday night, so I wasn’t thinking too clearly. I also forgot to wash my hands on the the way to the airport. Regular readers of this blog should be able to appreciate the implications of not washing my hands. For new readers, I give you Exhibit A. (Read that link when you get the chance.)

When I travel, things happen–many times involving planes, check-in, passengers or luggage. Or body scanners. Or pat-downs. Today, it began in my room. As I surveyed my luggage, I noted that I purchased a few items on my trip that individually would not weigh much, but when added to my already 49.5 pound fully packed suitcase would put me over the 50 pound limit. I already chafe at paying the $25 luggage fee imposed by the airline industry, so I will do anything (including throwing away my blow dryer at the airport) in order to avoid paying another commie surcharge cent to United Airlines for an overly heavy bag. With the “scale game” in mind, I made the decision to leave my brand new full-sized shampoo and conditioner behind in order to pack six days of free mini toiletries instead. It is only without much sleep and a slight hangover that this made sense. 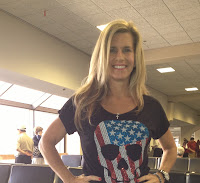 I explain this only to present my state of mind with regard to choosing my outfit for the flight home. I’d need to wear my heaviest jeans and boots, carry my thickest sweatshirt, and pack as many bulky items as would fit in my backpack and purse. The only clean shirt left was a cute little, dare I say “blingy” red, white and blue skull shirt my daughter gave me for Christmas. No warning bells went off when I ripped the tags off and pulled it over my head. Not even a warning whisper. And when I styled my hair, I made sure to spray it with enough hairspray to last two flights and the inevitable nap that was awaiting me in seat 11B.

See, I’d been lulled into a false sense of security by the removal of Bakersfield’s full body scanner. After forcing the little two-terminal airport to purchase a $10 million dollar scanner, the FAA later decided that bigger, busier airports needed the newer technology more than Bakersfield, thereby making Bakersfield a perfect entry point for bomb carrying terrorists by sending our scanner to–oh, say–Dallas-Fort Worth.

Dallas airport is a breeze. Shuttle drops you off near the gate, no one in line at check-in, and off you go to security. Shoot, why did I leave so early? At that rate, I’d be waiting at Gate 4E with two whole hours to spare. I couldn’t believe my good fortune when I saw no line at the x-ray machines, either. Wow… this was going to be a snap.
And then I saw it. The fully body scanner. I looked down at my jewel bedecked skull shirt and the rivets on my jeans and knew I would be the most popular person in the airport in about 60 seconds.

Stepping inside the plastic tube, I raised my arms like I knew the drill and waited for the signal that a terrorist wearing flashy clothing was loose in Dallas. This time, at least, I knew it was coming so I was prepared.
“Wait right here ma’am,” said a man studying the monitor. When I heard it beep, I looked at the screen sheepishly. “See this right here?” the man said. “Your shirt made the sensors go off.”

Not to say there’s anything wrong with his machine, but the girl depicted in that X-ray was lit up like a Christmas tree from her ears to her stomach. I was not wearing earrings. Was that really me? I was beginning to wonder about an airport security scan conspiracy.

I smiled, nodded my head, and did everything but produce my wrists for the handcuffs. I think he must have been waiting for an outcry. “These blasted machines!” I’d say. “I have rights!” But there was no outrage, not even when the female security officer told me she’d need to touch my breasts. Would I like a private room, she wondered. “No,” I told her. “Let’s just get this over with. I’ll never see these people again.” Just as she was finishing, my mind was already halfway on the airplane when another TSA agent approached me with those familiar little white cloths to test my hands for bombs.

Oh no. Oh no no no no. My foggy head snapped out of its post-convention funk. I FORGOT TO WASH MY HANDS!! If the hairspray I’d used earlier was still on my hands, and why wouldn’t it be??, I’d be in for another frisking. I hesitantly watched as he swabbed my palms with the cloths, and I held my breath as he placed them into the machine. Praying was not going to get me out of this one; I squeezed my hands together and could feel the sticky hairspray. Five seconds later, the alarm and red lights went off and “EXPLOSIVE RESIDUE DETECTED” flashed on his screen.

The female TSA agent looked at me sympathetically and asked, “Did you use lotion on your hands this morning?” Do they train these people to ask that? I’ve set off the residue sensors twice, and twice I got the same question. “No, actually I made a bomb in my hotel this morning. Can we move this process along, please? I’m hungry.”

I don’t mean to imply that TSA agents are usually bored at work, but boy, when this girl passes through a checkpoint, airport security sure gets to implement all of their emergency situation techniques. In seconds, they collected my tubs and escorted me to the side, where—and I kid you not—they took their white swabs and went through everything. When the first girl began removing my gum and lip gloss, my anxiety told me it was a good idea to strong-arm her verbally: “You better remember where everything goes. It took me a long time to pack that purse right.” I didn’t really expect compliance. And why should they humor a terrorist? They emptied my purse, swabbed the bottom. Swabbed my cell phone. Swabbed my camera, my laptop, my new David Sedaris book, my iPad, my wallet. They swabbed my shoes, the zipper on my jacket, the emptied bottom of my backpack, which hadn’t been used since the girls were in high school. If bomb residue was on my hands, wouldn’t it be on everything I’d touched? What if Jordyn had spilled something in that backpack?

Dallas wasn’t playing. Each swab was used on one item and placed in the bomb sniffing machine. These machines seemed a little too sensitive. I was nervous, not amused like I was when it happened in Bakersfield. I started picturing myself in a police car having to explain that I wasn’t a terrorist, just an idiot who wears stupid clothes and fails to wash her hands.

Then it was time for a private room, and I do mean private. If I thought the pat-down in Bakersfield was intimate, then by comparison, I think this TSA agent and I are exclusive now. Nothing… n-o-t-h-i-n-g went untouched. Let me say, ladies, that if there’s bomb residue down there, it isn’t a problem even the GYN can handle, much less the TSA.

The whole time, and it was a while, they used surgical gloves to “go over” me (and by “go over” what I really mean is in, out, under, around, between and atop). When finished, the gloves, front and back, were tested for bomb residue. I know I wasn’t breathing. Smiling, but not breathing. “Look, I’m pleasant and smiling–I’m no terrorist!” but by that point, even I was beginning to wonder if I was. Did I make a bomb this morning? My head was still fuzzy. Anything is possible after HauntCon.

Luckily, I was released. But a couple of things became clear. One, “Big Sexy Hairspray” is the bomb (bad joke), and two, the sweet TSA agent did manage to put my purse back in its original organizational order. The fact that nothing else became clear (proper air travel attire maybe) is a little troubling.

I’m going to Portland in a few weeks. I think I’ll dress in a robe and slippers.