“V” is for Veterans

Sometimes it just happens. Whether from being in the right place at the right time, providence, or simply an act of fate, occasionally we get an opportunity to enter someone’s circle of healing.

As Rob and I left the movie theater one night a few years ago, my mood couldn’t have been more charitable. We had just seen a comedy, emptied an entire large bucket of popcorn and a bag of M&Ms, and laughed like two carefree kids. As we crossed the parking lot and contemplated our next high caloric activity, I noticed something on the asphalt.

“Looks like a wallet,” he said, jangling his car keys and watching as I inspected it.

“Nope. It’s a cell phone.” But, not just any cell phone—it was the most expensive model on the market, one that I knew someone would be missing. When I opened the case, the phone was locked, so I couldn’t scroll through the contact list to find the owner.

“You want to leave it at the ticket booth?” he asked.

“Are you kidding? No way! Young kids would love to have this phone. At least I know it’s with an honest person with me.”

As we walked to our car, I started to get the impression that Rob didn’t want me to be responsible for the phone. He grumbled in the way of a man whose wife had just brought home a stray mountain lion instead of a calling device; he was edgy and acting like I was in possession of a stranger’s child rather than a cell phone.

“It’s probably some kid’s phone,” he said dismissively, implying that a teenager would replace the phone quicker than I could find its owner.

“No, I don’t think so. The picture on the screen is of a young soldier–probably the owner’s daughter.” 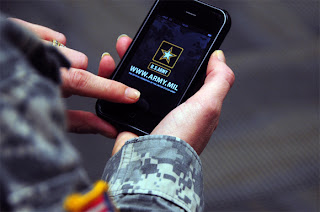 Once we settled in and drove off, the cell phone vibrated. When I opened the case, the smiling soldier background lit up again. It was an incoming text, but I couldn’t respond because of the security lock.

Instead of driving straight home, we went to a nearby gas station to fill-up, which was clearly Rob’s way of biding time. He was really saying, “Let’s stay close in case the mafia wants their phone back.” I could tell it bothered him that I’d decided to hold the phone for safekeeping.

Finally, after turning it over in my hands continuously and willing it to happen—the phone rang. I opened the case and “HOME” was flashing. Ahh… the owner.

“Helllooooo! I have your phone!” I greeted happily, secretly excited to give someone the news that a Good Samaritan had found his phone.

The gentleman on the other end of the line was ecstatic and thanked me for finding his phone. He asked if we would return to the movie theater, where he would come to pick it up. I agreed, and he thanked me repeatedly. With a light heart, I ended the call.

“I told you it was a father of a soldier,” I said triumphantly. I smiled to myself as we turned out of the gas station’s parking lot and headed back toward the theater. Getting an idea, I reached into my purse and found a scrap of paper. On it, I scribbled the sentence God bless your soldier and drew a heart beside it. I slipped the note inside the cell phone case.

At the theater, there was a large, 50ish-year old man hovering anxiously near the box office.

“That must be him,” Rob said, and I could hardly wait for the car to stop to jump out.

He was a big, burly man, but he exuded kindness and gentleness. As I crossed the street, we made eye contact and knew why we were there.

“Thank you so much,” he said with relief when I approached. “I thought I was going to have to turn it off, cancel it, the whole thing!”

My heart swelled with joy from making him so happy. Privately, I couldn’t wait for him to read my little blessing for his soldier.

“It’s my pleasure,” I said, then watched as the man waved happily and fairly skipped to his own car. He thanked me at least three more times.

The man drove one direction and we drove another. “You can tell he’s a good person,” Rob said as we headed toward the freeway, his tone suggesting that he’d surrendered to the rightness of what we’d just done.

“Yes,” I said sighing, allowing myself to feel good as I remembered the man’s grateful smile. I don’t know what it is about doing a good deed, but the person doing the good always seems to feel as great as the one receiving it.

We hadn’t driven four blocks when we heard a horn blaring. I pressed the button to roll down my window, and it was the same man speeding to catch up with us. He had his window down, too.

“Thank you so much for your note!” he hollered as he drove alongside our truck.

I absolutely beamed. “Oh, you are so welcome!” I yelled back, giving him my best Forrest Gump wave.

If happiness manifested itself as helium, I’d have floated right out the window.

He continued. “I appreciate it so much! The soldier is my daughter,” he yelled out his window. “She died October 1st, so thank you so much for that message!”

In that instant, my helium was gone. My stomach dropped like a popped balloon, and my heart doubled over in pain. All the previous euphoric feelings I experienced morphed into unspeakable grief and love for a total stranger.

“I am so sorry,” I yelled back, my smile gone, my eyes, I knew, filling with tears. It had been just six months for him.

I stared out the window until Rob rolled it up from his side. We were both too stunned to speak.

Inside our car, if it weren’t for the road noise, the only sound would have been my quiet weeping, caused by the quick and profound grief I experienced through a stranger’s loss. We have a 20-year old, and I put myself in this man’s shoes.

“Wow,” Rob finally said. “Why do you think he needed to tell you that?”

“It’s his way to keep her memory alive,” I said, wiping the tears off my face with both hands. “He wanted to talk about her. It’s his way of dealing with the grief.”

And, in that moment, I knew why I’d found the cell phone. It was a reason so much bigger than saving someone $500. I was directed into this man’s circle of healing—a stranger—through a lost cell phone.

It wasn’t about the cell phone, after all. It’s never about “the cell phone” in anyone’s story. The instrument might change, but the story stays the same.

(Editor’s note: I did not know her identity at the time I wrote this, but after some Internet research and the help of a friend, I found out the name of his soldier.)