“Y” is for Yellow Cat

Some people were born outrageous animal lovers. I was not. My parents granted my brother and me the obligatory pets: a poodle, turtle, parrot, rabbit, and cat. But when any of them died, they were replaced faster than we could dry the tears on our face.

“The rabbit got out and the dog next door killed it.”

I looked at the bunny my dad was handing me: it was white and also had red eyes. Huh. I did not know rabbits were totally regenerable. I named him Redeye 2 and carried on.

This regenerative practice stopped the tears but may have developed a certain apathy in me toward pets. Sometimes I’d come home to find one of the indoor dogs had mysteriously disappeared. Gone to doggie heaven because he was “ready.” Huh. And a new pup appeared before the water in the dog bowl evaporated. 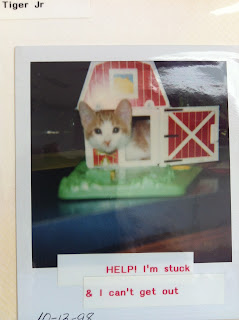 When I delivered my first baby, however, I discovered that kids were sooooo much cooler than pets, and when the doctor put Jarret in my arms, my first instinct was not, “Huh, seems totally replaceable.” I couldn’t keep naming babies Jarret if something happened to this guy.

For the ensuing string of child rearing years, I could not go to extreme measures to save an animal. If we had a sick dog and the vet’s bill would be over $50 to cure him, we took the dog home, gave him baby aspirin, and prayed for the best. We did not have much money raising three kids on one income, so choosing baby formula over expensive overnight veterinary bills was humane… for the humans.

My passion for children trumped the affection I had for animals, and I could not relate to childless couples who treated their pets like children. “They are     a-n-i-m-a-l-s,” I could hear my inner voice snipe when friends would slip into depression or call in to work sick over the loss of a pet. “It isn’t like you lost a child,” I said to myself. I could not fathom spending hundreds of dollars to keep a pet alive, particularly one who was at the end of his life anyway.

It would appear that God had some work to do on my empathy. A lesson was coming. 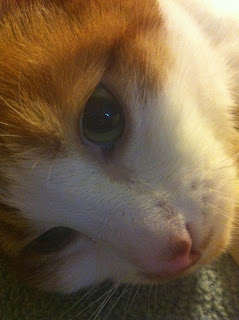 I think that an essential element in teaching children responsibility involves growing up with pets. One of the first pets we adopted after having children was a yellow and white stray cat who got pregnant on our front porch so often we nearly hung privacy curtains and charged admission. The kids loved her, but she was feral and would not stay indoors. On her second litter and before a visit to the vet to fix the recurring pregnancy issue, I finally allowed Jordyn to choose one kitten to keep. She selected a yellow and white tabby we named Marie.

I am not proficient at identifying gender in kittens, a shortcoming I learned only after my toddler shoved “Marie” inside a Fisher-Price plastic farm house and got the small kitty’s head stuck through a window.

I called the vet.

Before dislodging Marie using a surgical procedure that annihilated the plastic farm house, the vet snapped a photo, laughed at me, then discovered that Marie was a male kitten. We would need a new name.

I named him Lucky for reasons I thought were obvious, and he became a hilarious family member for the next fifteen years. He tolerated being dressed like a doll and subjected to stroller rides and fake bottle feedings. To escape, he’d climb the bunk bed ladder so he could sleep with his owner, Jordyn.

This story brings me nearly to the end of the A-Z Blogging Challenge, and my second-to-last letter of the alphabet… “Y” for the yellow cat.

For the last several months, Lucky, now 15, showed signs that his body was slowing down. On Mother’s Day, he grew very ill, and I thought nothing of calling emergency, after-hours, holiday vet services to see what was wrong with him. Between that bill and the visit to Lucky’s own vet a few days later, I spent more than my first mortgage payment.

What was happening to me?

As the weeks wore on, I made sure Lucky was eating and drinking, and eventually he was even allowed to sleep in the curve of my belly each night so he knew how much he was loved. He wasn’t getting better, but I would not accept that it was the end. I couldn’t imagine our lives without this silly cat. He had, after all, grown up with Jordyn.

A new personality had emerged, and this Dana had morphed into a veterinary spendthrift. I admitted our failing cat into the vet hospital to see if Dr. Sheahan, the same vet involved in the farm house incident of ’98, could perform one last miracle. I knew that a rebound was a long shot, and I understood that I may have to take out a loan to pay this vet bill.

I was behaving like one of those pet lovers I never understood.

As I drove away with my empty cat carrier, my icy heart thawed. I was discovering how wrong I had been for the 23 years I’d been grinchy toward passionate animal lovers. Comparing loving a pet to loving a child is unfair–the losses would be incomparable. But to discount one loss because it can’t compare to another loss isn’t relevant; it’s all pain, and it’s personal. Pain does not change characteristics depending on its source. Pain is pain, and it’s authentic.

Pet ownership is a double edged sword; we must love and lose many animals over the course of our human lives, which means that we subject ourselves to intentional pain each time we adopt a furry friend. Pet ownership is to bind yourself in love for years, a silent contract between a person and an animal, a contract in which the pet claims, “I will love you unconditionally forever. Just take care of me.”

I write this essay of gratitude for two reasons: I am grateful to Lucky for his years of loving service to this family. And to Lucky, thank you for teaching me the human capacity for loving a pet.

I will miss you, Yellow cat. 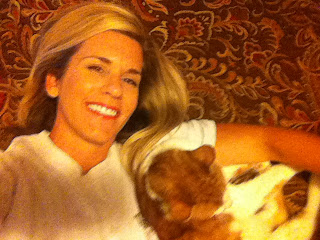